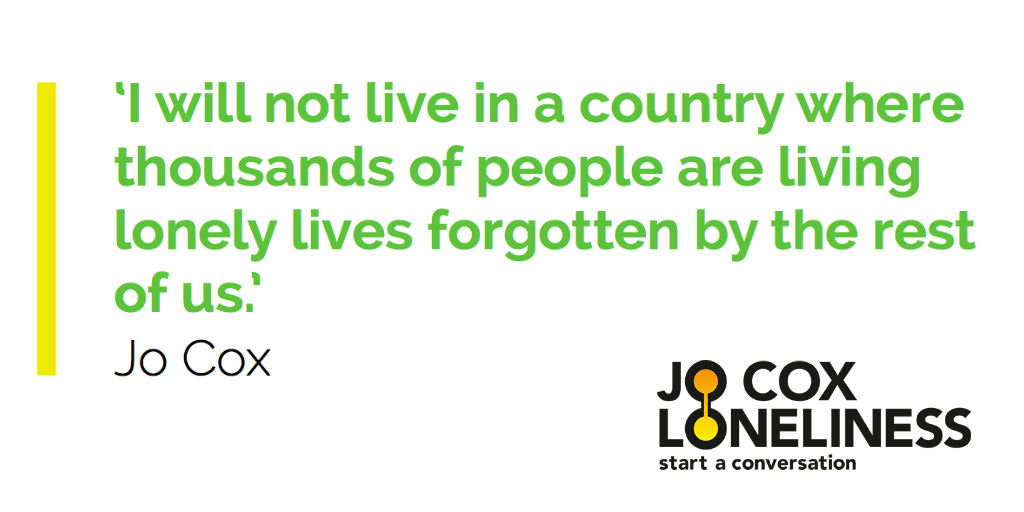 I was lucky enough to be part of a discussion panel in July to help shape thinking  for the Jo Cox Loneliness Commission. I’m delighted to see today its call to Connect for a kinder tomorrow – new approaches to loneliness.

‘Starting a conversation each day in your neighbourhood can be a radical act of community service’ is advice that resonates strongly with me. We see 100s of people in crisis we know will have had no caring interaction with anyone in their communities that day or any other day.

Even though Graham had a job as a cleaner, Job Centre Plus were worried about him. They referred him to us. Graham wasn’t keen. He’s 57 and proud. He has a learning disability and hearing impairment. Eventually, he met Mia from Grapevine. Reluctantly, he allowed her to help. He really needed help – he was in a vulnerable situation.

He existed on £60 a week, lived on baked beans and never had the heating on in the house he occupied alone (he slept on the sofa under a pile of coats). Worse still, a man would take Graham to the building society and withdraw money – £500 at a time.

Graham wasn’t living in a special or residential group home. He rented his own home in an ordinary street in an ordinary bit of Coventry. This all happened in plain sight.

Mia was able to help Graham solve some problems. She arranged that the building society would contact her before handing over large sums. She sorted out Graham’s debts. But she was realistic about what she could achieve: ‘Yes, I can help sort things out. But what Graham needs is ordinary people in his life – people who will look out for him in the long term so these problems don’t keep coming back.’

Grapevine helped Graham start to move from a life on the margins. But he needs connections with ordinary people who care about him to avoid going back.

Cash strapped public services are exhausted,  our own often constrained by commissioning criteria. But other help is there, it just hasn’t been unlocked.

Frustrated by traditional service models we’ve searched for new solutions that unlock the pre-existing resources in communities and turned to social movements for inspiration. Social movements can teach us how to unlock people’s willingness to act together on a problem.

Social movements have shown us how we can go beyond the model that says every problem needs another project and instead put the emphasis on unlocking ordinary people’s capabilities to help themselves and those around them.

Next year Grapevine will spark a movement that tackles isolation among people like Graham in Coventry. Isolation makes people vulnerable to abuse, cruelty and loneliness. Communities where people are connected to each other end isolation. Our ambition is to end it for good.

The Commission publishes its manifesto on Friday. ‘We can’t afford not to act’.