A few weeks ago we were asked if Grapevine was a trusted community organisation based near Wyken and if we brought people together around shared activities or beliefs. Odd, but stick with us.

Virtual pins had randomly been dropped by the Global Assembly on 100 locations around the world and the UK pin had amazingly landed in Wyken, Coventry! 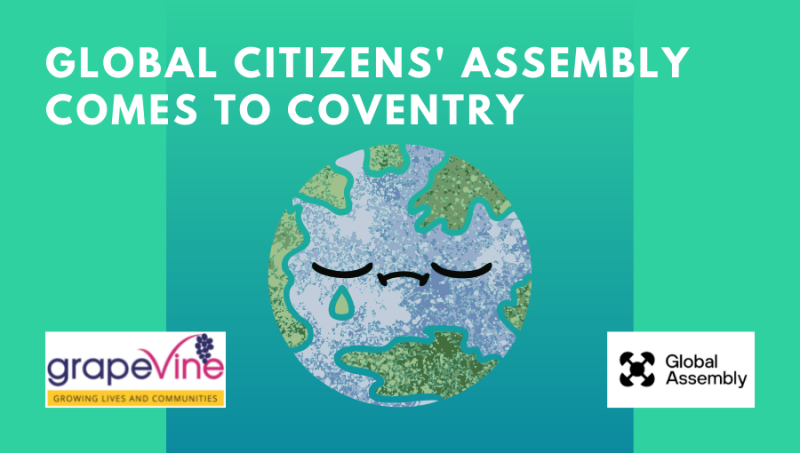 Next question: Would Grapevine like to join Global Assembly as a co-host for their core assembly in the run up to the United Nations Climate Change Conference #COP26 in Scotland in November?

Yes, yes and yes were our answers.

Now we need to find six people from Wyken who represent the diversity of the community there by next Monday (20 September). From those six, one will be randomly selected by a sortition (lottery) process and go forward to learn more about climate change, feeding their ideas for change into #COP26 through the global citizens’ assembly.

You don’t need specialist knowledge about climate change or politics to take part. This is a unique adventure with a seat at one of the most important tables in the world and Grapevine will support the chosen person to join in.

The Global Citizens’ Assembly brings together 100 people from those 100 places across the planet to be part of the first ever global discussion. The results will be presented at #COP26 in November. The ambition is to build a permanent global body, like the United Nations, but for citizens and everyday people – a true representation of the world we live in.

So who can take part?

Anybody aged 16 and over from Wyken and the surrounding areas. From a mixture of ages, genders, ethnicities, educational backgrounds and attitudes to climate change. Especially those people usually missing from the table when decisions are made.

What is the process?

How does it work?

All sessions will be online and in English. Grapevine will support people to take part.

There is a small payment of US $600 for the chosen participant who takes part from 7 October to 8 December 2021.

What do I do next?

Email Jess at Grapevine for more information and to register your interest. Don’t delay! We don’t have much time: jpinson@grapevinecovandwarks.org.